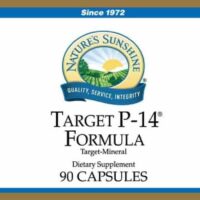 This herbal and mineral formula was formulated with nutrients that must be present for proper pancreatic function. Target minerals are chelated to specific amino acids, and as chelates, they are readily absorbed and targeted to specific body systems.

This herbal and mineral formula was formulated with nutrients that must be present for proper pancreatic function. Target minerals are chelated to specific amino acids, and as chelates, they are readily absorbed and targeted to specific body systems.

Amino acids are used as chelates since the body can only utilize minerals in an organic-bound form. To be absorbed most efficiently, minerals should be chelated (bonded) with amino acids. Amino acids are the best chelates because they neutralize the electrical charge of the mineral. The mineral is then less likely to combine with other minerals to form an insoluble compound which would pass out of the body. Amino acid chelates are also easily and efficiently absorbed.

It has been found that the type of amino acids that a mineral is chelated to will cause it to be directed to different body organs and systems.

This appears to be due to the fact that different organs and structures contain differing mixes of amino acids. By determining which three amino acids are found most abundantly in an particular organ and bonding a mineral to those amino acids, researchers have been able to target mineral nutrition specifically to those organs. This only works with the purified amino acid chelates. It does not work if the amino acids are simply mixed with the mineral salts and it doesn’t work if the sulfides, chlorides, etc. are not removed from the chelate during the bonding process.

Nature’s Sunshine follows the guidelines of this research to produce a pure and potent product.

The target minerals of this formula are chromium and zinc, which are chelated with the amino acids glutamine, leucine and lysine. These are added to a proprietary blend of 14 herbs that target the health of the pancreas.

Zinc is a companion mineral that’s involved in maintaining proper blood sugar levels and in the functioning of B vitamins. It seems to be easily lost from the body.

PLEASE NOTE: Target P-14 may seem to be the same as Pro-Pancreas, but it is not an herbal formula. It is a targeted mineral formula with an herbal base. The herbal base is a minute quantity, placed there solely as a synergistic factor for the minerals. Pro-Pancreas is a companion product for this formula and generally they are used together for a program to strengthen the pancreas.

“I began TARGET P-14 and Pro-Pancreas (3-3x/day) on Saturday. Monday at the doctor my sugar was over 500. The following Monday my sugar was 104. I continued 3-3x/day for a few weeks and have cut back to 2-3x/day as a maintenance program.” D.Tipper

“We have a wonderful lady who keeps our home clean and looking good. We enjoy helping her in any way we can, so we suggested she try some herbs for her diabetes since she was struggling under the expense of buying insulin. We had seen another friend use herbs with great success and wanted to see her do well also. She agreed. We bought the herbs and she began taking Pro-Pancreas and Target P-14 twice a day. It’s now about two months later and she’s cut her insulin needs in half.” R&J