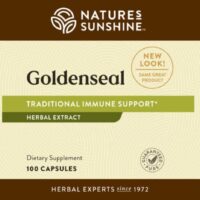 Golden Seal is native to North America. The plant has been largely over-harvested and is periodically in short supply. Its immune-supporting properties are largely due to its hydrastine, berberine and canadine alkaloids.

Golden seal provides an unfriendly environment for microorganisms. It is said to help support the mucous membranes that line the respiratory, digestive and urinary tracts.

Because demand for the herb is high and supplies are low, golden seal is one of the most expensive herbs on the market. For this reason, many herb suppliers are tempted to adulterate supplies of golden seal with other herbs of similar chemical composition, such as Oregon grape.

Recommended Use
Take 2 capsules with a meal twice daily.

Cautions
Pregnant women should not use golden seal since it may influence uterine muscles.