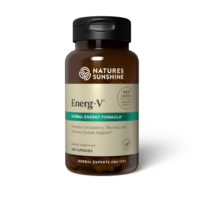 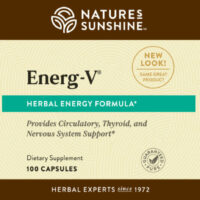 ENERG-V is a comprehensive herbal combination designed to work with the body’s glandular, nervous, and circulatory systems to promote increased energy metabolism and improve glucose utilization in the body.

ENERG-V provides the following nutritional benefits to the body:

Nutritionally supports the glandular system.
• Contains Eleuthero, Licorice Root, Bee Pollen, Kelp, and Barley Grass, high in natural mineral content.
• Trace minerals, used by the body as cofactors in hormone production, increase natural metabolic functions including energy production.
• Eleuthero, Licorice root, and other herbs in ENERG-V build the adrenal glands which work closely with the Nervous System. Stimulation of the adrenal glands causes a release of glycogen from the liver to the Nervous System.

Increases the circulation of nutrients to all cells of the body.
• Contains Capsicum, a general circulatory stimulant, to increase nutrient delivery to the cells of the body.
• Licorice root and Rose Hips provide a ready source of natural plant sugars, easily converted to glucose for energy production.
• Schizandra, stimulates the heart for improved circulation.

Of special note in this formula are the following
Eleuthero – “. . . shown in studies to be an effective short-term stimulant which does no harm.” Stephen Fulder, “About Ginseng” Assists the adrenal glands, and aids in cerebral function in the body.

Kelp
– Contains every trace mineral which has been shown to be useful to man. The sea being the repository for all minerals leached from the land by water represents a nutrient-rich medium of growth for all sea plants.

Licorice root
– Contains 10% Glycoryzin, a sweet-tasting glycocide, easily converted by the body to glucose. Also assists the body in adrenal function, and in the release of stored glucose from the liver.

This product was formulated by Joan Vandergriff. as a National Manager for Nature’s Sunshine, she felt there was a tremendous need to combine the energy, glandular, and vitality herbs all into one product.

According to Joan, most Americans have two basic health problems. They have elimination problems and low energy levels. With just two products (Cascara Sagrada and ENERG-V) both these problems can be resolved, making a vast difference in many people’s lives at a relatively low cost.

Joan wishes the royalties from this product to go to the National Health Federation which helps to protect our freedom of choice.

ENERGY
“I don’t do a lot of exercising, especially bike riding. I was invited to go mountain biking with a friend in the mountains of Utah. I was afraid I wouldn’t survive the strenuous climb. I took ENERG-V
and Target Endurance, two Nature’s Sunshine Products, for two days preceding the ride, and on the day of the ride. I found that I was not even hungry during the day-long ride, and even more, that I was able to keep up with my friend, who has been riding these trails for three years. After the 21-mile ride, I did not experience any stiffness, and my energy level was normal the following day.” Dallin Wall