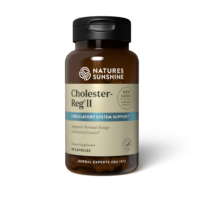 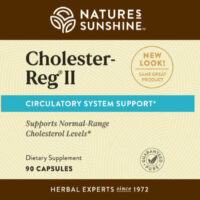 How It Works
Each ingredient in the formula plays an important role in the effectiveness of the product. Policosanol appears to perform a similar action in the body as red rice extract. Plant sterols compete with the absorption of cholesterol in the body. Inositol nicotinate helps relax smooth muscles and improves microcirculation . Resveratrol maintains LDL and triglyceride levels. Artichoke powder (Cynara scolymus) benefits the liver, promotes digestion and is popular in Europe for its ability to maintain cholesterol levels.

Resveratrol is a polyphenolic phytoalexin, a chemical compound that acts as an antibiotic in plants that are under attack by foreign organisms. Resveratrol is produced by several plants and is found in the skin of grapes; in peanuts; in berries of the Vaccinum species, including blueberries, bilberries and cranberries; in some pines, such as Scots pine and the eastern white pine; and in the roots and stalks of giant knotweed (Polygonum sachalinense) and Japanese knotweed (Fallopia japonica, Polygonum cuspidatum, Reynoutria japonica).

Previous studies have indicated that resveratrol may extend the lifespan of some non-mammalian animals such as yeast, worms and vertebrate fish. Recent research led by investigators at Harvard Medical School and the National Institute on Aging found that resveratrol increased the lifespan and the quality of life in obesity. Resveratrol also reversed nearly all of the bodily changes found on high-calorie diets, including those associated with diabetes, heart disease and other significant diseases related to obesity.

According to the scientists, these are positive clinical indicators and show that resveratrol may safely reduce many of the negative consequences of excess caloric intake, with an overall improvement in health and survival. It is believed that resveratrol may activate SIRT1, a gene associated with longevity.

It’s important to note that these studies examined the benefits of isolated resveratrol and the benefits associated with the consumption of wine may not be as significant. The resveratrol content of wine is highly dependent on grape type, climate and practices used to make the wine. Unfermented grape juice does not contain resveratrol.

However, scientists have long known that a moderate intake of alcohol and red wine in particular, is associated with a lowered risk of heart disease and other benefits. It is believed that the “French paradox,” or the fact that people in France enjoy a high-fat diet yet suffer less heart disease than Americans, may be attributed to the consumption of resveratrol in wine.

Recommended Use
Take 1 capsule with a meal three times daily.

CHOLESTEROL
“My cholesterol was 400 with triglycerides of 3,000. Not a great picture of health. I decided to do something naturally since I didn’t like the long list of side effects when I read about the drugs. I chose CHOLESTER-REG
and also did some liver cleansing with LIV-J
. In less than three (3) months, my test results showed the cholesterol was down to 220 and the triglycerides down to an amazing 300. I like doing it the natural way!” D. L.