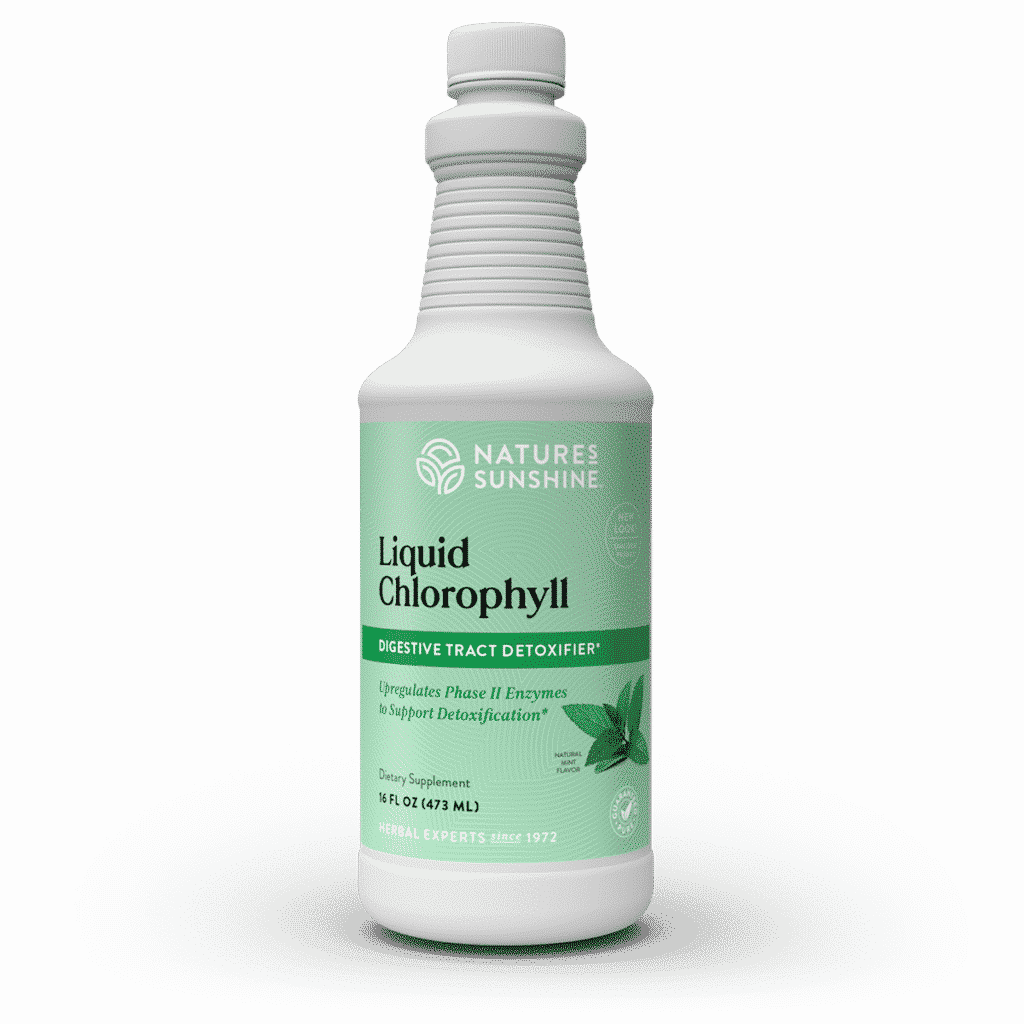 •Deodorizes the body, including the bowel much like an internal deodorant.

Product Label – Place your mouse cursor over the image to zoom in to read the label.

Blood Count Low
“I have always been a blood donator, but many times I couldn’t donate because of a low blood count (red cells or something). I have been drinking LIQUID CHLOROPHYLL for awhile now, about three (3) times a week. I gargle and swallow it. Well, last week when I went to donate blood, my blood count was good and I was able to donate! I think it’s because of the chlorophyll building my blood.” R. S.

Hearing Loss
“My grandson’s hearing test came back with a hearing loss of 30%. At 4 he had tubes put in his ears. We didn’t want that again, so I used CHLOROPHYLL, ECHINACEA & ALJ. In 4 weeks the test was normal.” Ruby G.

Fibroids
“I had a history of female problems: Questionable pap tests, heavy menstrual flow, uterus lined with fibroid tumors, I’d had numerous D&C’s, and I was on progesterone to control the bleeding, but it wasn’t doing it. I was bleeding 26 days a month for 6 years. I finally began to hemorrhage so much that my husband took me to the Doctor who said I needed an emergency hysterectomy. Blood work showed that my blood count was too low for surgery without transfusions, and after receiving several shots I was told to come back in 3 days for the surgery. We’d heard of herbs and had a friend who used them, so we went to her. I began taking NF-X (NF-X is no longer available, but you can substitute FEMALE COMFORT ), RED RASPBERRY, CALCIUM PLUS, and LIQUID CHLOROPHYLL. Within 2 weeks the bleeding had stopped. In two months there were no tumors, the pap test was clear, and that was 11 years ago. I feel better than I ever have in my life and I’m thankful for herbs.” D. Scott

Gastrointestinal Bleed
“I thought I would write and give you an experience I had with LIQUID CHLOROPHYLL. Two weeks ago I had an upper GI bleed. I really lost a lot of blood and felt very week and woozy. I took SLIPPERY ELM and also took the last of the NSP Chlorophyll that I had that night. It was Saturday night and I hate the emergency room, so I felt I could take care of it. I got H-p FIGHTER the next day and started on it, and drinking 1 quart of fresh cabbage juice a day that my dear Floyd fixed for me. When Monday came I could not see my doctor, because he was not in the office. I have problems with doctors and decided to wait for him, which ended up being a week. I got another quart of Liquid Chlorophyll and began taking a lot (probably an ounce or more in water about 5 times a day at least). Within 24 hours I felt stronger, and every day felt better. I also used CHAMOMILE tea, GINGER tea, H-p FIGHTER, and the cabbage juice. When I did see the Dr. I told him everything I’d taken. He said it is working, because when he pressed my stomach it did not hurt. He didn’t give me any medicine or make me go through heavy testing. He did a blood test, and when we got the results my hemoglobin was 14, lowest accepted normal is 12.5 according to my lab sheet. In l997 mine was 15. When the nurse told me, she said he said everything looks good, and to remember what I did and keep doing it. He told me I was braver than he, since he would’ve put me in the hospital had he been here. It made me feel really good that I was able to take care of such a serious problem. Also made me appreciate you folks for helping me with my herbal education. Thanks again. You may use this experience if you like.” S.C.     (Tea can be made from any of the capsules if opened into a cup and boiling water is added.)

Heartburn
“I’ve been drinking LIQUID CHLOROPHYLL in my water and my husband has been teasing me and wouldn’t try any. One night he had heartburn. As we were going to bed, I told him to take some of the LIQUID CHLOROPHYLL
(it has spearmint in it also). He did and slept through the night and woke up without any heartburn……well, needless to say, I’m sharing my bottle of Liquid Chlorophyll now.” Jeanette L.

Hospital Recovery
“We began seeing a much more rapid improvement in his recovery when we started giving my Dad the COLLOIDAL MINERALS and LIQUID CHLOROPHYLL. He was so deficient in his minerals and vitamins so this really helped!! Also, he couldn’t sleep, and taking sleeping pills wouldn’t help, so I convinced Mom to give him CALCIUM PLUS and that night he slept the best in weeks.” J.S.