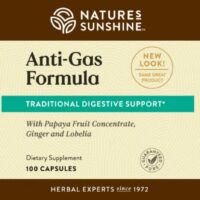 The stresses of modern-day living can easily cause unbalance in the delicate digestive system, bringing unpleasant side-effects. Two such effects are excessive gas and bloating. One of the causes is swallowing air with a rushed meal, since eating while under emotional tension tends to “lock up” the whole digestive mechanism, and the food may begin to spoil in an environment in which millions of bacteria can multiply out of control. people, especially as they age, make less and less, especially if they are using antacids. A prime suspect in stomach ulcers is a stomach-invading bacteria. Attacking the bacteria gets to the root of the problem. Acid reflux is a common health problem with stress at its roots. If one chooses not to deal with the stress they will need digestive support with formulas for acid reflux.

Anti-Gas Formula is designed as a safe food to encourage good digestion, rather than being a drug. The formula is not designed to address everyone’s stomach problems, including ulcers. Nevertheless, it is made of certain herbs that have been found to assist the body in stabilizing a digestive system with minor upsets and flatulence. Following are some of the helpful characteristics of these herbs in this popular formula:

Papaya fruit contains proteolytic enzymes that enhance protein digestion. It has long been used in many countries for indigestion, flatulence, nausea and belching.

Ginger root contains aromatic compounds that increase the production of digestive fluids and enzymes. It is an excellent natural source of trace minerals like silicon, magnesium and manganese.

Peppermint leaves also contain aromatic compounds that increase the production of digestive fluids, and works with the nervous and circulatory system.

Wild yam root contains bitter compounds that are important to the glandular system and the hormone balance that affects digestion and other body functions.

Fennel seed contains aromatic compounds that help stimulate the production of digestive fluids and that also work well with the urinary and respiratory systems.

Dong quai root smells wonderful and along with soothing the nervous system, it helps increase the production of digestive fluids. It also contains bitter compounds that help regulate stored energy (glycogen) in the liver.

Spearmint leaves are similar to peppermint, and help with increasing the production of digestive fluids and enzymes, and also work with the nervous and circulatory systems.

Catnip herb helps to calm the nervous system and works well with the action of the mints.

Lobelia herb is a powerful relaxant, of which, the effects can be felt all over the body.