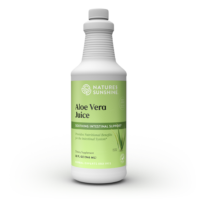 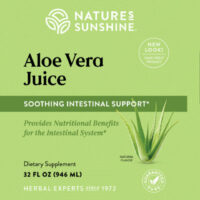 Aloe vera is a member of the lily family and is only one of about 300 known species of aloes. Most of these are native to Africa. Aloes have long been used by native people as both health and beauty aids. Aloe vera is the most commonly used today. Aloe makes an easy-to-care for house plant and looks similar to the cactus, though it is related to lilies, hyacinths, onions and asparagus. Although a native of southern Africa, today aloe vera is primarily grown in the West Indies and the American Southwest.

• Soothes the internal tissues of the digestive and intestinal tracts

• May be used topically to moisturize dry, healthy skin

Two major products are derived from the aloe vera plant. One is a bitter, yellow juice present in the cells beneath the surface of the thick “skin” of the leaves. This juice is the source of the aloe, which is a harsh purgative. The other product is obtained from the fleshy interior of the plant. This is called aloe vera gel.

Some methods of preparing aloe vera products involve solvent extraction, often with harsh physical and chemical treatments, resulting in a gel that is hardly representative of the fresh aloe. Other companies’ products may be as little as 15% aloe vera.

One of the most honored methods of preparing aloe vera juice is used by Nature’s Sunshine.
This involves filleting the leaf, removing the green outer portion, which contains the aloin, and leaving just the gel that exists in the leaf, That gel hangs together by itself when the leaf is first filleted. just a few minutes later, the enzymes in the gel will break the structure down so that it will become a running fluid instead of a standing gel.

If one tastes the juice at that point, it does have the typical, strong aloe flavor. That’s as close to the natural aloe as one can get without actually opening the leaf and tasting it. Many of the aloe products on the market now are advertised as being without taste. In the processing of these products, however, active principles are removed also.

The aloe leaves are filleted just outside the fields soon after they’re collected. Then the juice Is stabilized according to Nature’s Sunshine’s specifications. The aloe has to be stabilized or frozen because it is a good nutrient. Bacteria and other life will thrive upon it to some degree.

In the preservative system that Nature’s Sunshine has chosen, we can use ascorbic acid found in vitamin C, citric acid found in fruits and sodium benzoate. Sodium benzoate is the most natural stabilizing system available and can be used in a very low quantity in an acidified medium, such as the aloe gel.  It’s probably the best for preserving aloe vera simply because it can be used in such small quantities.

When the plant is filleted, the very bitter-tasting aloin that is in the outer epidermis of the leaf and the inner lining of the gel is removed, representing between five and ten percent of the gel. Sometimes when other companies prepare aloe, the whole aloe leaf is crushed. It is much cheaper to crush the leaves than to fillet each leaf separately. When that is done, the aloin is retained, which makes the juice extremely bitter. The bitterness can be removed by distillation, but this distillation also removes all other active principles in the gel.

Recommended Use
For best results, drink 2 to 6 ounces daily. Drink this refreshing vegetable juice with meals as is, or mixed with fruit or vegetable juices if desired.