Many pet owners have been heartbroken when told their pet has heartworms since the chemical treatment is so toxic there is no guarantee that the dog will survive it and the cost is most often beyond the financial capabilities of some pet owners.

For cats, heartworm disease is less common, occurring about 10% of the rate that it occurs in canines. For example, in southern Florida which has continual mosquitoes, the rate for dogs nears 100% in outside dogs, so an outside cat would have a 10% chance of getting heartworms.  The chance of an indoor cat getting infected is pretty low, but has been indicated as a possibility. The nice thing about herbal prevention is that the herbs build health and in the process eliminate other kinds of parasites that may create other health problems and certainly challenge the immune system.

Robin Sockness-Snelgrove’s dog was diagnosed with a severe case of heartworms. She had decided to do an herbal alternative to the chemical treatment since her veterinarian did not think her dog could survive it. She had seen herbs work effectively for many things with the people and pet members of the household, so she wanted to try the natural route.

It worked! Her dog has tested clear for four (4) checkups and she was interviewed by Whole Dog Journal for an article in the August 2002 issue.

We are now calling the program she used, “The Bandit Program,” after the name of her dog.

She used Nature’s Sunshine Products and will recommend only those because she knows the quality, purity and potency which are all required for success. She has worked with over a thousand pet owners since 2001 and has heard too many sad stories of other brands not working, so she will be very up-front with you about only working with Nature’s Sunshine Products. She doesn’t want to be involved in any more of those sad stories.

As you can see there is a safer choice that works. We do recommend that you contact a veterinarian that will support your choices. We, BensHerbsPlace.com, cannot prescribe or diagnose for you or your pet, and neither can Robin. We can only share information.

These are the herbs and nutritional products used by Bandit. The amounts used for each animal is different based on breed, indoor/outdoor pet, and weight.

Upon waking and nightly before bed, Bandit took Artemisia Combination on an empty stomach.

With AM and PM meals, Bandit took Co-Q10 and

Yucca was used as needed for coughing. It helped Bandit during his periods of coughing, since Yucca is considered an herbal cortisone.

We Aren’t Qualified To Answer Heartworm Questions – Please Contact Robin about the Bandit Program at her website.

You should keep your animal on low activity until the heartworms are passed [which is through the lungs] and you get the clear re-test. No racing around. Pets will generally moderate themselves, but it’s wise to be cautious and not encourage excitement on the down days when they may be passing.

This natural program worked for Bandit. There is a reason for each product used. Bandit’s “mommy” has informed us she gets emails from people who are taking pieces of the program and trying to get the same results — or are using products that do not have the same potency/quality and they’re not getting results. This is a concern to us since we do not like hearing sad stories. 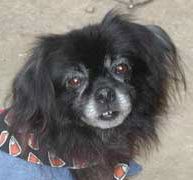 Bandit said goodbye to this world today. He lived 7-1/2 years instead of the 6 months that the vet gave him. The heartworm program not only took care of the heartworms but made him so much healthier and like a puppy again. This dog was a hero in every battle he fought and was the love of Robin’s life long before she fell in love with her wonderful husband, Steve. He is missed by all who knew him, but his legacy lives on as Robin continues to help other animals, as she promised Bandit she would do when he tested negative on his heartworm test after the program.

Bandit continued to test negative at each annual checkup and Robin continued to help hundreds of animals each year not only with heartworm but other health issues. Her customers are rewarded in knowing they are also helping other pets because Robin does a lot for animal organizations with the funds she receives from her website sales. It’s sure been a win-win situation for everybody involved. Bandit is still grinning and one day, we will all be together again.