Testimonials Provided by Pet Parents Who Used The Program
1 2 3 4 5
Do you have a success story you’d like to share?
Send it to us. We will reply and request a photo to go with it.
If you don’t have one, that’s okay. We’d still like to post your story!

Lyric
On a vet trip for an unrelated problem, it was discovered that my dog had contracted heartworms. She was classified as a “low case” and they wanted to immediately start her on treatment as it was the only method, they claimed, that would kill the worms.

Researching the treatment’s dangers, I hoped there would be an alternative method. A friend directed me to Bandit’s Heartworm Program. I immediately purchased the herbal supplements and followed the guidelines on your website, administering Artemisia and Black Walnut as directed (I also added garlic a few times a week during the ending months of treatment).

I let the vet know what I was doing, and he advised me to keep my dog on a monthly prescription heartworm preventative in addition to the herbal supplements. The reason for his advising this was so there was no chance of microfilariae (baby worms) developing into adult worms. With that understanding, I opted to keep her on a monthly prescription preventative to ensure that I would only be treating the worms she had when diagnosed with absolutely no chance of the microfilariae developing into adults.

On a vet visit about 6-7 months after I began the herbal supplements, I had her tested for heartworm — Negative! I now have complete faith in this regimen and I no longer use prescription preventatives. If the herbal supplements killed the adult worms in only 6 months, it can certainly prevent them. Thank you for the website, let’s keep spreading the word, it’s saving lives. — Lyric & Indie”

Gigi
Our family is extremely partial to boxers and we have always bought them from breeders. However, this time we decided to rescue one. As God would have it, the day we set aside to look for a dog, there was one at a pound, only 45 minutes away! We (all six of us) went to meet Gigi. Poor baby! She was skin and bones and terrified of EVERYTHING … especially people.

With four children around, Gigi didn’t have a chance at staying afraid of people. They loved on her, hand fed her, slept with her, brushed her, walked her, etc. She has become the best dog we have ever had; the most loved dog in the world. So when we took Gigi in for a routine check-up and found out that she had a severe case of heartworms (apparently contracted at least 4 months before we adopted her), we were devastated!

The vet recommended that we either euthanize her, or put her through a $1,000+ regimen. We couldn’t afford the treatment, so we went home and told the children what the vet had said. They cried for two days and gathered up their life savings (about $20) to help pay for “Gigi’s heartworm poison”. I was already treating my family with essential oils, so it occurred to me that there must be some way to treat my pets holistically as well.

Google, here I come! Lo and behold, Bandit’s Heartworm Program popped up! So I ordered the regimen and began it right away. Fast forward to her next routine check-up (6 months later). I asked for the heartworm test to be done, just hoping that the severity would be down to moderate or mild. The vet came in with the results of all the tests and said, “Gigi is a very sweet, healthy dog. Just make sure you brush her teeth regularly.”

That’s it?  So I asked about the heartworm test … (drum roll, please) … NEGATIVE! In 6 months! Wow! I barely restrained myself from doing cartwheels and expressed how pleased I was. That was when the vet rechecked the chart, realized that Gigi had previously been diagnosed as being heartworm positive and started back-pedaling. “Oh, our test must be defective! We’ll need to send the blood work out to another lab!” It has been two weeks and I haven’t heard a peep from her! — The Geurink Family

Great Dane
I contacted you a while back about my 7 year old Great Dane who had been diagnosed with heartworms. He is very traumatized by being confined in any way so we were researching alternative methods of treating his heartworms. We sent you his information and you responded with recommendations. We have had him on the Nature’s Sunshine products you recommended and today when he went for his annual visit his veterinarian told us his heartworms are gone!!! Thank you so much for your help. We will definitely be referring people and please let us know if we can ever do anything to help get your message out. — Dennie Smith 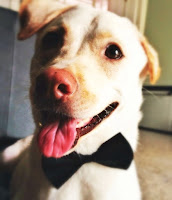 Beano
We rescued Beano in Singapore, January of 2013. He came to us as a foster dog and was diagnosed with heartworms, tick fever, and distemper. Luckily, the tick fever and distemper were cleared, but we didn’t know how severe the heartworms were until after we adopted him.

The vet suggested that we do the Immiticide treatment and since we weren’t educated on other options, we decided to go for it. After the first round of treatments (3 shots total, steroids and no exercise), we retested him and found he was still heartworm positive. My husband and I were devastated. The vet told us we needed to go through another round. I started doing some research and came across Bandit’s Heartworm Program and showed my husband.

He was definitely skeptical at first, but trusted me to try it if I thought it would work. It felt right in my gut to try it and I didn’t want Beano to go through another round of Immiticide. We ordered 3 months worth. We knew we would have to be patient with the process …there were so many pills to give him each day and we didn’t know how long it would take. We got sneaky with the Artemisia and used a small amount of ice-cream to “coat” the pills. That definitely worked! As for all the others, we mixed with his food just fine. I ordered the Yucca just in case, but never needed it.

About 1 month and 3 weeks into this routine we needed to take him in for his annual immunizations. During the week of this appointment, we noticed he stopped eating his breakfast if it was mixed with the pills. We thought this was odd, but in the back of my mind (and later found out my husband was thinking the same thing) I thought, “Maybe he knows he doesn’t need the medicine anymore?” So while we were at the vet, we asked them to check for heartworms. She asked if we were on, or just concluded treatment for it, and I said yes, we’re doing a holistic treatment. She paused, looked at me, and said, “Ok.”

Within 10 minutes of running the test, she came out to the waiting room and said, “Beano is heartworm negative.” WHAT?!!!! Not even 2 months into the program, and he was heartworm free! I can’t even express how happy we were to hear those magical words! Thank you, Robin, for finding and sharing this method with us.

Every dog is different and will heal at different times. We believe Beano was a mild case which was why he reported back “negative” so quickly. We are firm believers in this holistic method and are so thankful it worked!!  — Chris, Ellie, and Beano  (Written June 2014) 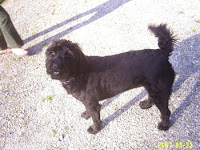 Daisey Doodles Rogers
This is our happy HEALTHY two year old Labradoodlem Daisey Doodles Rogers. We adopted her from a Poodle rescue in February, 2011. They sent us home with a six month supply of heartworm medication which we administered every month like clockwork. When that was gone we switched to a different brand and again administered it every month religiously.

Imagine our surprise and heartbreak when Daisey tested positive for heartworms at a routine vet visit in January, 2012. We couldn’t believe it!!! We were devastated. We discussed the traditional treatment with the vet and actually scheduled a date for the procedure. We couldn’t get it off our minds, we were so upset and shared our sadness with some close friends that are also animal lovers. They went on line and hooked us up with some websites regarding natural herbal treatment for heartworms.

She tested NEGATIVE. Hooray!!!! Thanks Robin!!! We will continue Daisey on the recommended prevention program and have every confidence that we are done worrying about heartworms! Thanks again Robin! — Daisey’s Mommy and Daddy, Chris and Deb 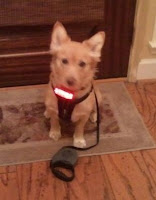 Cool Hand Luke
Six month after we adopted Cool Hand Luke (now he goes by Luke), he tested heartworm positive. We took him to the vet to discuss conventional treatment. I didn’t like what I heard. When we got home I got on the Internet and did more reading on it and decided that there should be a better and less harmful way to treat the heartworm.

We prayed and a day or so later I came across Bandit’s Heartworm Program. We were very encouraged! I made another appointment with the vet and brought Luke for a work up to see if there was any organ damage. I also shared with her about the Bandit’s program. Of cause, she never heard about it, but luckily was very understanding and encouraging. She did recommend giving Luke doxycycline to jump start the treatment and we did.

By the time we finished with antibiotics, Nature’s Sunshine Products, arrived and we started the program. Mid-December we were going out of town and  had to board Luke. He tested slightly positive. The vet suggested a retest in six months. My husband couldn’t wait that long and brought him in on Thursday, May 26.

His heartworm was negative! We were ecstatic! Robin, thank you so much for sharing your journey and for putting this program together! Thank you to all who share their success stories. They carried us through Luke’s nine months treatment. — Sincerely, Ron & Anna, TX.